I haz teh fuzzies! 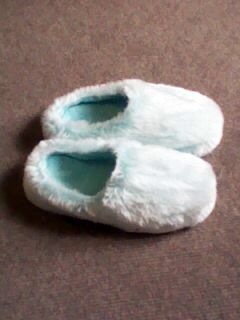 It wasn't too bad, though. The trip -- at least to the parts of downtown that I walked through -- ended up being uncomfortable, but not to the level of anxiety. I wouldn't have wanted to do it at night, though.

I had to walk for quite a bit. I left university and headed downtown, but after a few blocks I realized that I only had ten pounds on me. Not having any kind of reference for how much footwear cost here (other than Clarke's, which has designer men's slippers for 20 pounds or more!), I headed back home to pick up more money[1] before going downtown. That added about 40 minutes to the trip.

It was about 25 minutes to get from my house to Primark (the clothing store recommended by two locals). It was in a car-less area -- evidently near the city centre, they have a few streets that are pedestrian-only. The store was small by North American department store standards... say, a quarter of the volume of the Bay at Brentwood Mall. I'm not certain if my slippers are officially women's slipper or not -- all the footwear was in one area, and most of them had heels. I looked for a separate section for distinctly male shoes, but couldn't find any. About 90% of the shoppers were female, although I did see some men's clothing. So the locals hadn't sent me to a lingerie store for a lark. :)

Anyway, I'm quite happy with these slippers. The outside of them is even softer than it looks... I spent a few minutes with my feet on the top of the slippers. Yes, I know that's not how you're supposed to wear them. But they were so soft! They remind me of my mother's fake rabbit-fur coat that she used to wear when I was a child. And they were only £2.96!